Ask your Veterinarian if Ivermectin is Right for you!
– Porridger’s Almanack (Breakfast of Ganglions)
This would be a better world for children if the parents had to eat the spinach.

The inspirations for the piece all relate to the text. The bulk of the text I have set is five choruses from Mexico City Blues. I was taken with the conceit of the poem, the idea of a singer/poet fronting a bop ensemble and extemporizing. The two albums my ear was “marinating” in while I was contemplating writing my piece were firstly, Trout Mask Replica by Captain Beefheart because the complete freedom and fearlessness of the music (and especially the vocalization) is just exhilarating, and secondly Money Jungle with Duke Ellington, Charles Mingus & Max Roach, an evergreen and indeed iconic album. These musical influences are transmuted through my own accumulated musical sensibilities and experience, so one should not expect my piece necessarily to “sound like” Beefheart or Ellington. I have played a lot of clarinet myself, and have written a great deal of chamber music including clarinet and flute, so one of my guiding principles in writing the piece was, I wrote music which I thought I should have fun playing. I was free to select my own text(s) and in leafing through Mexico City Blues, I was like a kid in a candy store, and at first I chose too much text to be practical for a piece of the desired scale, so the greatest challenge I faced was in striking the right balance between the "volume" of text and the duration I was aiming for. Discovering my musical material was in large part easy, as Kerouac's words are so musically suggestive and by turns electrifying and lyrical. What I think will engage and perhaps surprise the audience is how the piece offers flute, clarinet and cello (on the face of it, not a “jazz combo”) together with the piano as vehicles of stylized “bop.”

My initial idea was to assemble a text from sentences here and there from a number of books (On the Road, The Dharma Bums) I had begun this process (highlighting sentences on my Kindle) when I added Mexico City Blues as an additional source, but then, in leafing through, it became evident to me that I ought instead to select a number of choruses from this last, which was new to me. Each of the choruses I chose had simply grabbed me for one reason or another in that first pass-through. A vestige of my first thought for “assembling” a text is the final line of the piece, which is the curtain line of the first chapter of The Dharma Bums. I am highly gratified to have learnt that both the pianist and the soprano like the piece very well. 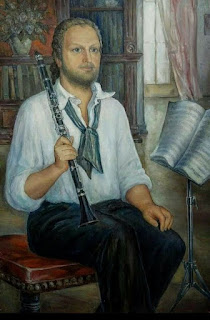