We were of the earnest opinion that the Crocodile Rock would endure.
– Postcards From Red Squirrel Trail
Being in tune with every molecule in the universe requires a great deal of concentration.

— Robin Williams as King of the Moon

We had our first choir rehearsal of the new church year last night. Turnout was on the light side, but we had music to read with the numbers we had. It was a good rehearsal.

What with not only the expenditure of energy in rehearsal, but the not-a-straight-line trip home, I was rather wiped out by the time I got home at 10 pm or so. I took my sweet time getting up this morning. At one point I considered upbraiding myself for want of motivation, but instead realized that today must be a day of recovery, and I must factor that in, going forward.

I know I posted in the past—what I believe I genuinely felt—that I would have written the Op. 172 simply for the promise of a performance, and that any money for a new piece is a plus. And I should be ashamed to voice anything like a complaint, since Maria paints museum-quality canvases which by rights ought to sell for tens of thousands of dollars, whereas she has never received anything on the order of artistically reasonable compensation. So I note simply that my subconscious had (without authorization) dreamt of a certain sum, which the reality has, I now know, failed to measure up to.

Nevertheless, this was an opportunity to write a crackling piece of chamber music which should make one hell of an impression. Remember, Karl, this is what matters. 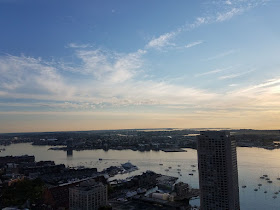