Massachusetts: Scientists at the Saugus Doo Wop Research Institute today announced the discovery of something which can stop the Duke of Earl.
– Porridger’s Almanack (Breakfast of Ganglions)
I always suspected that once we started working together, we’d be working together for the rest of our lives, for the reason that we seem to have such a unique chemistry. I didn’t find that with anybody else, and I never have. There’s other people I like working with, but there’s nothing like working with the other Firesigns, when we come together as an ensemble.

My Triad task of late has been to coordinate conducting assignments, and it is coming along nicely. I am close to having a rehearsal schedule for our first rehearsal on the 13th. Even though I am still waiting on some material and some responses, I want to broadcast a rehearsal schedule Saturday morning, to give folks time to prep.

There’s a Rhode Island chamber ensemble who periodically call for scores. They’ve never selected music of mine yet, so the smart money is on its being wasted effort ... but ... I got a [probably automated] e-mail today saying that the call is still open, even though they [probably] have already received 500 other submissions.

But, heck, I do have new pieces which have not yet been performed, and if the effort be wasted, it is only minimal effort. So I have submitted both The Mask I Wore Before (which went nowhere with the competition for which I originally wrote it, and an all-strings arrangement of Pam’s Labyrinth, which I almost wish that I had retitled I Was a Teenage Lesbian Supremacist for this process. 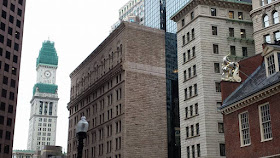