Breakfast of fear: Dreaded Wheat.
– Postcards From Red Squirrel Trail
Where a man can stand by another man without an ego flying.

Even though it’s exactly what I was banking on—to minimize disruption of work on the Op.172—I finished When, Op.173 for choir and alto flute in the space of three days. It runs four minutes and change, and is a setting of a charmingly simple poem by my “virtual acquaintance” Jayaprakash Satyamurthy of Bengaluru:

When in a late year

Late in an early decade

I could hear your mouth

Your eyes finding mine

When in a late year

We walked with time

And listened to the sky

My eyes found yours

Your ears sought me

When an early sky

And we were found to say

This is an early year

This is the first decade.

And, after this afternoon’s reading of the Op.119 № 2 with Janet and Peter, it’s back to Kerouac! 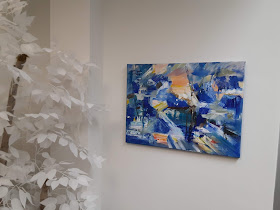