Planning the Opus 169 (and not only planning)

Minnie Mouse has got it all sewn up: she gets more fan mail than the Pope.
— 10cc “Life Is a Minestrone”

Quite some time has passed since the last piece I wrote for organ solo, the Sonata in 2013, so I have been thinking of writing a fresh set of short pieces, for HTUMC’s organist, Barbara Otto. I’ll say that, since both the Op. 28 and the Op. 34 consist of three pieces, it was natural for me to think at first of another set of three pieces.  But as I went for this evening’s stroll to the pond, I reflected how lazy it would seem of me to dig myself into a three-piece rut, so I shall write a set of four, and (as I did with the five numbers of the Mass, I shall dedicate each of the four to a different colleague, as a thank-you.  There is a fifth colleague whom I should like thus to thank: Paul Cienniwa, but Paul has switched hats, from a church music director, to the CEO of the Binghamton Symphony.

I made a good start last night in finishing Barbara’s piece, the Op. 169 № 1, titled Where bright angel feet have trod. 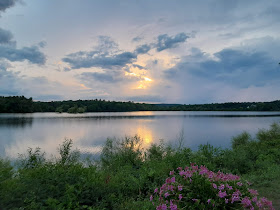