The clangor of the handbells won the day as we patiently made our way through When the morning stars sang together, and the sons of God shouted for joy yesterday morning, several times. There is enough that is peculiarly new to the group with this piece (and it is the first we've rung together since Christmas Eve), that I anticipated the usefulness of patience; but in fact, my ringers twigged the piece fairly soon; and that, in spite of my having missed a marking or two in two of my ringers parts. So, we'll go ahead and Charles Turner will bring his shakuhachi along for next Sunday's rehearsal. I expect that this experience will further ignite enthusiasm . . . I was not expecting to be able to put the piece together at all quickly, but, we may. We just may.

Yesterday afternoon, Charles and I rehearsed his two Angel pieces together for the first time: Send Me an Angel and Dance With an Angel (a tango). Both pieces are good fun, atop of being well written. There is one brief passage in Send Me with the clarinet way up high where I seldom venture these days, and on first reviewing the piece, I sounded Charles out on the possibility of an ossia passage (in case I should have too little practicing time). But yesterday, while I quite regularly mangled those bars, it became clear to me that I should indeed be able to manage. Oh, with that practice thing, yes, indeed.

Last night, Scott shared with me the wonder which is the yodeling pickle. More vinegar would mar it, to be sure.

And this morning, I resumed (at long, long last) work on the Credo. Here is the evidence. It isn't much, but it's where I expect to go with this section of the text. (Actually, I did do more work . . . I have long suspected that I wanted to add a few ornamental flourishes to the contrapuntal sections which, until this morning, were the last of the music I had freshly composed for the piece. Just a few pen strokes here and there, but probably a bit more work in the sense of tinkering with the Sibelius file . . . may need to delete the text from the staves, and then re-add it after I have done modifying the voice-lines.)

(Or maybe it will just be easy-peasey.) 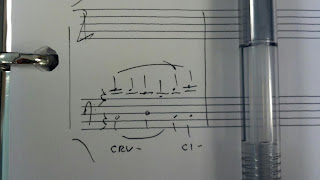