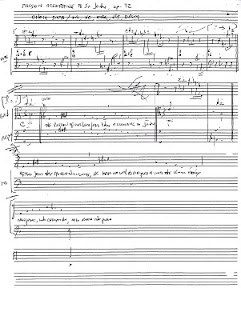 The first page of work I did on the St John Passion, and thus, still reflecting my earliest idea of the piece, employing those members of the St Paul’s choir who played instruments, in their instrumental capacity. Musically, I almost do not remember this page . . . immediately after, I got to earnest work on setting the text.

Even at that point, though, I likely fancied yet that we would employ that light, eclectic instrumental consort . . . as with Pascha nostrum, I wanted to get the treatment of the voices established in my ear.

In the event I abandoned the instruments, and for two reasons. One reason was practical: I had a premonition that rehearsal of the piece would not be budgeted any great deal of time — and if not, better to “streamline” the piece.

The second reason was musical, as I realized while I was making my way through my largely chantified version of the start of the narrative, that towards the end I wanted to divide the choir into as many as seven parts, so our choir-members would not be available to play their instruments — all hands would be needed to sing, so to speak.
Karl Henning at 07:16