Just landed in Atlanta. Preparations for the trip, atop all the usual distractions of the weekly routine (for which, of course, I am only grateful) curtailed my blog activity. Thrilled at how well Out in the Sun is reported to have gone in Ann Arbor, and I am keen in hopes that a recording will come. 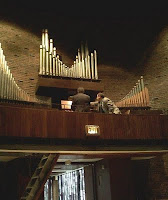 [ click for larger image ]
Thursday morning was such a blur, that (even though I have the poster taped to my cubicle wall) I had clean forgot about the fact that Paul Cienniwa would be playing the Three Short Pieces at the M.I.T. chapel that lunch-time. Happily, Paul thought to text me, and great was my joy at reading the message, and realizing that I could still make it over to Cambridge. There, I renewed and expanded an acquaintance with organist Leonardo Ciampa; and we two will get together to read some of my cl-&-org music in early December.

Later the same day, Paul played the same program in Fall River. He reports that it went well, and remarked of his astonishment that (apart from the all-inclusive applause at the end of the program), the audience applauded my modest Three Pieces the longest.

Happy to report the continuing renewal of musical partnership with organist Bill Goodwin; I will be a guest musician at First Congo in Woburn the Sunday after Thanksgiving.

Response to the anthem-of-a-sudden, my five-part Tallis-esque setting of what is hopefully a public domain text by an obscure (unless you happen to be Unitarian) nineteenth-century minister, has been gratifying and immediate. It is on the slate for a 6 December ordination service.

Now, of course, to remove garments from the valise, hang them up, and rehearse Heedless Watermelon for its Atlanta debut.

Good flight, really. They gave me an extra packet of “mini pretzels” as consolation for when I asked for peanuts, and there were none.
Karl Henning at 17:51