I had a monumental idea this morning, but I didn’t like it.
-Samuel Goldwyn

Après-lullaby has been making slow progress, or, had been making progress, and now I’ve got to take a little stock. A couple of passages are not quite as they ought to be. They’re not “throw ’em out” quality; I've suspected that they need only minor ‘tinkering’ to set them right, and the key has been to work smarter, not harder.

[ click for larger image ]
This is the last stretch of an ostinato passage which is ‘about’ a 31-quaver pattern (7 crotchets [14 quavers] + 17 quavers), and two chords. It is a passage which emerged out of a too-idle thought (even such thoughts, I like to turn to some good use) on the primitive order of, a whole piece from only two chords? (No, this won’t be that piece.)

This stretch of the piece is close to working as I wish, so it was necessary to address the how of getting it ‘just right’. So I decided the thing was a little ‘performer’s attention insurance’, and I added little flourishes, eight in total (not all of them shown here, and two per player) whose appearances form a kind of accelerando.

[ click for larger image ]
The illegible remark in the left margin is Chorale P5 [i.e., perfect fifth] higher. Insofar as I have any cosmic design for Après-lullaby, that design springs from (a) the ostinato nature of Lutosławski’s Lullaby, and (b) the counterpoint of Marginalia; the latter piece was ‘just something I wrote’ while visiting Moondi and his lovely family in Bethesda . . . but then, there may be reasons I write the things that I ‘just write’, so I listen (somehow).

Anyway . . . immediately after Maria’s birthday (5 & 6 August) I composed a chorale-cum-counterpoint to serve as part of Après-lullaby which would tie in with the Marginalia. At some point (a week-ish ago?) I then discovered that I wanted a passage which welds the material from the chorale, with the rhythmic game of the ostinato. It’s not a complicated idea, but it has required a bit more focus than this week has quite given me any luxuriating in, hence the unconscionable slop of these two examples. 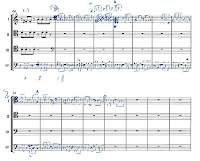 [ click for larger image ]
This really is the mass of dough which looks nothing like the finished cake.

The simple, simple idea which wants execution here is to take the rhythmic pattern established by the initial bass entrance (notated below the musical example of the second illustration above), and apply it to a transposition of the chorale. The only distracting ‘complication’ results from needing to displace one of the voices in the final chorale an octave lower, and the corresponding shift between two of the players. Nothing serious, only it is another reason why I need to sit down with it for a proper hour.
Karl Henning at 20:42