I’ve a friend here in Boston (though we don’t cross one another’s path all that often) whose dad lately passed away. On the lines of our not meeting in person all that often, how I learnt of this event was via facebook. This friend is a fellow musician.

When my own dad passed on, I did not (for whatever passel of reasons) respond at all musically. Offhand, I do not now remember what may have been going on in my musical life at the time (my ‘musical timeline’ exists on something of its own plane, detached from day-to-day existence).

Belatedly, I became aware of my friend’s loss yesterday. Last night, there was a televised program about Gaudì which all of us at home wanted to see, but beginning at ten o’clock, which is a later show than I should really stay up to watch. The solution was for me to nap a while before, and I was awakened for the Gaudì show, after which I retired properly. My sleep last night was not of the most profound (though, nonetheless, completely restful) and at some point last night, in between bouts of sleep, a short musical epitaph came to me, a sustained whisper for solo trumpet. Musical ideas come and go, so in spite of the immediate practicality of returning to sleep (or, trending toward a return to sleep), I stayed my mind awhile, and thought this musical idea through, exercised enough concentration upon it that it should register in memory, but not so much concentration as to compromise a fairly prompt return to slumber, by too much mental activity.

This morning’s routine of waking to the alarm, preparing to leave for work, and the walk to the bus, ran its course in entire forgetfulness of the music in the night. Once on the bus, I pulled out the notebook from my bag, and started to look at the page of Lutosławski’s Lullaby as I’d begun arranging it for cello ensemble.

At which point, I heard the short trumpet piece again in my inner ear.

So, I turned the page, and set to writing. 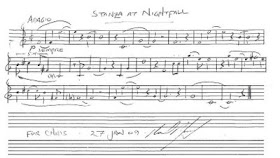