Pushing the Lullaby Along

Puttering some more with adapting Lutosławski’s Lullaby for a group of violoncellos. At first, when I thought in terms of eight ’cellos, I had a certain texture and manner in mind. And, having that in mind, when I subsequently learnt that what was wanted was four parts (possibly dividing into five), initially I discarded the idea of adapting the piece.

Since which time, not only have I decided that the piece can readily be made to work in four single-line parts, but I keep thinking of different ways to approach this musical ‘problem’. So the time had come to put some notions on paper, partly for the plain practical matter of sorting the divers notions of arrangement into priorities. The task proper has by now been made easy, because my thought has for such a while now been bent upon it, from a variety of angles. 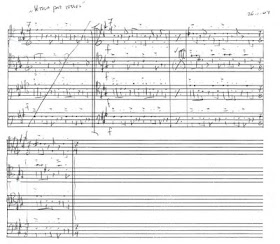