When I happened to overhear the phrase “generic popsicles,” earlier today, it wasn’t so much what the young lady said, as the way she said it.
– Porridger’s Almanack (Breakfast of Ganglions)
A created thing is never invented and it is never true: it is always and ever itself.

the Symphony № 3 is inching along, which I like just fine. Back in October, when I left the score to rest on the shelf, I had an idea for m. 165ff. but I could not then discover the execution I wanted (meseems my thought was clouded in part by uncertainty that mm. 145-164 were quite what I wanted there. My doubts on that head were (I think now) simply unnecessary. Anyway, today I found just what I wanted for that conceptual passage, and now the piece runs 9 minutes.

Unless the evolving situation with the pandemic forces a change in Triad’s plans to sing concerts on 19 and 20 March, When will in fact be performed then.

Much as I love Miklós Rózsa’s score for Double Indemnity, of course, part of me wants to say that my favorite moment is when the Schubert Unfinished becomes the soundtrack of Fred MacMurray realizing that he has been a tool all along.

A good friend just posted that he solved today Wordle in two tries; he adds: That’ll never happen again. I realized today that it’s the perfect game for Americans...getting the right answer makes you feel proud of your accomplishment, but how well you succeed is largely determined by how lucky you are at the beginning.

I replied: The few times I’ve tried, luck was not with me, so I’ve decided that whenever a friend posts Wordle success, I’m going to celebrate by composing five measures of new music.

Sketches of Igor Fyodorovich’s for Petrushka: 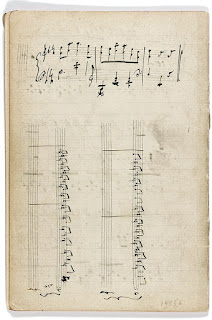 This is not really an occasion for fanfare, so leave us proceed simply. As I reported earlier, I found myself in a place unusual for me, in feeling no motivation to compose. So, I did no composing proper for some 15 weeks. It was simply not feeling like writing, I was not anxious about the condition, nor did I feel it would be at all permanent. The last work I did on the Symphony № 3 was on 4 October, when the piece ran to almost seven minutes. My evening’s relaxation last night led to enjoying a commentary upon All About Eve, mostly by the son of writer-director Jos. L. Mankiewicz. The thought of resuming low-key work on the Opus 175 had been in mind for (say) a couple of weeks) so it was unusual in the first place, that I actually set to some work, and doubly unusual in my deciding to set to work as late in the day as 11:30 PM. I did a little tinkering, and then put up the shop and hit the hay. I’ve done some more work today, and the piece runs eight minutes at this point. Making no promises, but perhaps I’ll work on it some more tomorrow. 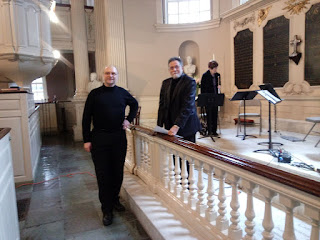