Back in, under the radar

Been watching quite a lot of Hitchcock lately, partly driven by my sister's having turned me on to The Trouble With Harry.

One big, pleasant surprise in recent viewing: Woody Allen's Love and Death, a most welcome reminder that when he keeps the whining to a certain level, his comedies can remain artfully comic, rather than a referendum on how self-absorbed the director can be.

We had a very good Triad concert, and "post-mortem" group meeting. This remains a group with a future (rather than, a group which half a year ago had a future). [That was a counter-example, not a diagnosis.] We have a new President (since our most warmly esteemed David Harris has now Gone West), and one of our latest singer-members has stepped in to fill the Secretary's office (since it is our former Sec. who has been promoted to the Presidency). The goals for the next season include: increased publicity, more fundraising, securing venues so that we sing each program at least twice, and to pay the singers.

I've agreed to serve as a sort of co-chair with Julian Bryson of the Composer/Repertory Committee. I am keen to begin to incorporate some Luke Ottevanger in our programming beginning this next season, perhaps with The Lamb for starters.

Oh, Henningmusick, you ask? We have sent a courtesy score of the Op.92 Passion According to St John to David Hoose; and we shall see.

Frank Grimes, of Ensemble Aubade, has now written, and he is enthusiastic about The Mousetrap. The plans for the 21 June concert having changed in the time since I had refreshed my outreach to Frank, we are aiming for 18 October. Looks like I may have more clarinet practicing in my future, and this may be a driver for proceeding with the Clarinet Sonata.

Further Ensemble Aubade news: I am officially invited to compose a seven-minute piece for them, to be premièred in November. Their management has already begun publicizing the event and piece, so I was asked for a title . . . I have settled on Oxygen Footprint. [It was but an idle hang-over from St Paul days (Ed Broms era), but my initial sketch for this trio bears the working title Ray Charles Needs Soloists.]

For the 21 June concert at King's Chapel, I am building fixed media backing for a wind quartet, the music to serve as a counterpoint to Maria Bablyak creating artwork in real time, a joint performance.

It may be time soon to attend to the Gloria, and be done at last with the Mass.  Since the Triad repertory committee has, as a provisional goal, the planning of concerts four programs out, perhaps I should suggest a grand première of the Henning Mass. 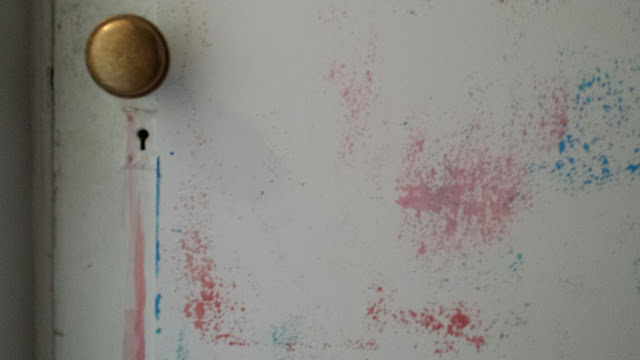 There is a hint of change in the air, though it will not take effect until winter.  A mildly sad change, but one positive result is, a return to regular collaboration with our much-esteemed Paul Cienniwa.

This is a mad week, with Cantata Singers rehearsals and concert eating up, nay, devouring, three weeknights, and cutting into two nights' rest. When I shall have caught my breath, I expect to consider it time gratifyingly spent; participation in this Pärt piece may be a rare Boston-area opportunity, and the two Bach scores I have never sung before. 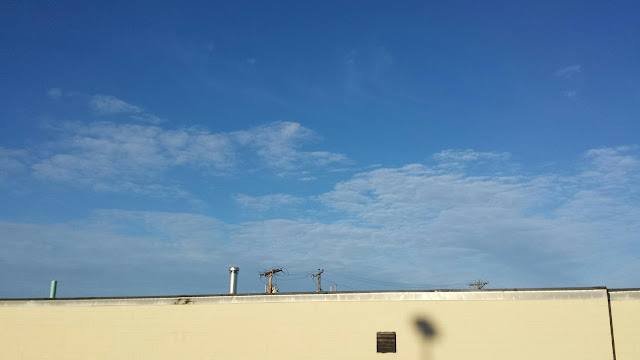 Last night, we sang our third concert as Triad: Boston's Choral Collective. In a bravura display of technique, artistry & assurance, Maria agreed (in the space of less than two weeks) to create two panels, to flank the choir as a visual element of the performance, on motifs drawn from the texts we sang last night. 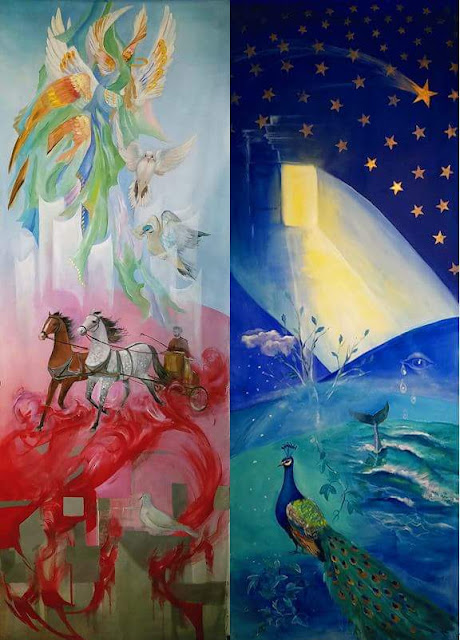