Lungs Now Neatly Laid Out. Thoughts on the new trios

There was something on the chair that night
the eggs were white, Fernando ....

As reported here, I completed composition of The Lungs a little more than a year ago. It was only this past week.  I suppose I was motivated by the positive tone of my 12 June encounter with Matt Marsit.

Separately, I've been somewhat immersed in both Bicycling Into the Sun (Feel the Burn) and Swiss Skis (the new ieces for Ensemble Aubade) for a couple of weeks now. My feeling about Skis is that it is something of a pastoral second movement, contrasting with the bravura of Oxygen Footprint  as a first mvt. And Bicycling is the closing gigue, which itself dissolves into a broad quasi-timeless coda in something of a Stravinskyan manner. In some sense, Swiss Skis springs from my harpsichord/violin duo, Plotting, which my old friend Gene Barnes characterized as "L'Histoire du Soldat" on steroids. For Skis, the viola takes something of the lead in a quasi-concertante rôle. There's an implacable quiet intensity in the 'A' material which I think one of the better things I've created. My sense is that when the violist digs in, the sparks will fly. I admit, too, to simply enjoying the misleadingly carefree tone at the start of Bicycling. And I consider the sparse exoticism of the coda (the Sun into which we've bicycled?) an especially felicitous invention. Sure, there must be an element of pride, in the accomplishment of composing both pieces soon after my discharge from rehab. But insofar as I can separate myself from the urge to pat myself on the back, I'm warmly enthusiastic about both pieces on (I believe) their musical merits. 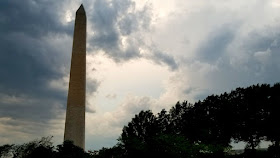