But, is now the time for rhetorical questions?
– Postcards From Red Squirrel Trail
Ah, well! We live and learn, or, anyway, we live.

I’ve been mulling of late, partly in response to a virtual acquaintance’s recent

enthusiasm for composer N. Composer N. is perhaps a year older than I. She’s an internationally

celebrated composer. In fact, I met her at Symphony Hall after a

Boston performance of a piece of hers. The Boston Symphony may

never play any of my music. There is no benefit to the idle

speculation that it is possible they may play my music after my death.

When Composer N. is commissioned to write a piece, the sum of money

If I and Composer N. sat down in conversation, and I told her the sum I was

paid for my recent commission, she might perhaps laugh, if she were not

such a nice person, as all reports suggest. None of this is composer N.’s fault,

and it’s not a zero-sum game. While I do not believe I hold any of it against

I did not enjoy nor think much of the piece that night at Symphony. I do

consider in hindsight that I may simply have been resentful, but neither do I

feel that I owe anything to composer N.

It also doesn’t help, that the artistic director of a choir dedicated

to performing new music, turned a piece of mine down (a piece

of which many colleagues

Composer N. upon whom they lavish their musical love. But enough of

Composer N. whom I wish no ill whatever, and who I hope will continue

to enjoy success and prosperity.

Today, I debate which better describes my state: low motivation or nil

motivation. My thoughts of late have not (despite the theme of the first

paragraph) dwelt upon either resentment of successful living composers, nor

self-pity. I am wondering what my goal should be, or even if having a goal is

of any use to me. For instance, up to now (let’s say) I have had

the ambition that the Boston Symphony Orchestra should play music

of mine. But it is plain to me that this is a foolish ambition, as there is

nothing I can do to make such a thing happen. Today, I wonder if

An old friend of mine composes only when commissioned to do so, and

has enjoyed some performance opportunities of which I can only dream.

I certainly do not resent him, nor feel envious of him. In a general way,

I might wish that I were in a similar position, but if I composed only

on commission, I should not have written White Nights,nor either of my two symphonies. It is pointless for me to wish that

I had been commissioned to write these, I am practically a musical

nobody and I have certainly been

treated so by musical somebodies. I am not going to be the next

John Williams. Setting aside the speculative q. of whether I could

successfully score a film, the universe has not afforded me any such

opportunity. Nor am I going to be the next John Adams, Philip

Glass or Joan Tower. I observe merely factually, with neither

envy nor resentment, that the universe has not afforded me

Then there is the clarinet, from which I have been perforce separated

by my stroke. I pursue my therapy and do my homework. My

determination remains staunch. Yet with the impaired sensation

in my fingers, it is simply impossible to know, today, when I shall

be able to play again. But I ain’t stoppin’.

Perhaps this week I am asking myself, why should I still compose? For most of my composing life, notwithstanding my negligible

level of success, I never needed to ask myself such a question. When

I was in rehab after my stroke, I did not

ask myself any such question, it was simply that I wanted to compose.

For only one thing, I

was determined to complete White Nights. If I don’t write my music,

no one will, I recall saying even as I lay in hospital.

As I write today, the latest of the Op. 169 organ pieces I composed was 31 May, and I don’t know whether I’ll finish

the set as conceived. The last I worked on the string symphony was 4 Oct.

I make no claim or promise as to

the future. I can only say, I don’t feel like writing today. 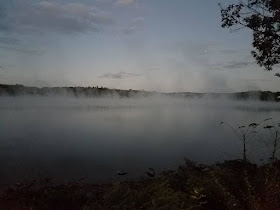