James and the Giant Leach
– Postcards From Red Squirrel Trail
you've got a collapse of confidence in the currency—people are gonna panic—there's gonna be gold riots, atonal music, political chaos, mass suicide!...

— Peter Falk as Vince Ricardo in The In-Laws

On the theme of inconsistencies/contradictions where no man has gone before, In the first Star Trek pilot (how wonderful that they were afforded the chance of a second) “The Cage” (and of course in the episode they creatively cobbled therefrom, “The Menagerie”) Captain Pike is captured by the inhabitants of Talos IV, humanoids with incredibly powerful mental capabilities who can thoroughly deceive the human sense of sight (especially) and who communicate with their charge by direct mental transference. Indeed, they can probe Pike's inmost mental recesses. They have lured Pike there to serve as the mate of Vina, a voluptuously beautiful (as Pike beholds her) earth woman who is the sole crash survivor of the survey ship Columbia. At the end, in order to convince Pike that Vina’s desire to remain on Talos is sincere, the Talosians show her to Pike as she really is.  The Talosians had pulled her out of the wreckage of the Columbia and “put her back together” — everything works, Vina explains to Pike — but they had never seen a human, and had no model to guide their reconstruction.

So these creatures with such extraordinary mental powers (they selected (through the vast distance of space) Pike because, Vina told us, he looks just like her ideal man.  Why, then, the Talosians could not have had their visual model of what humans (in general) and Vina (in pointed particular) look like (from the mind of Vina) is, I submit, one of the great gaffes in Star Trek scriptdom.

Just finished Come Unto Me and Live, Opus 169 № 4 for flute and organ, for Dolores and Robert Jan August 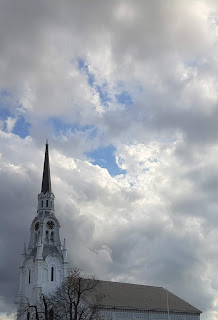