The Ax Is Whetted

Jazz is the result of the energy stored up in America.
— Geo. Gershwin

I had the text ready for the Op. 167 on 9 April. I sent the parts out to the choir on 11 or 12 April.  In the way of practice/preparation, I created what I called a “proto-mix,” using the first three recordings that had come in, on 24 April.  I liked it, and pretty much wanted it to stand as the start.  More singers sent recordings in over the next two weeks, but I pretty much dawdled.  I was in a state of “fixin’ to do it” all through the Independence Day weekend.  Lo! on July the 9th I acted, at last.  Response both from the singers and from my “focus group” was generally positive, with the greatest concern being a feeling that the lower voices were underrepresented.  I worked up an alternate mix on the 10th  but the file exports mysteriously failed.  User error? Perhaps.  At any rate, I tried again today and: no problem.  I pronounce Best Get the Ax, Op. 167 done.
And we have a Triad meeting this evening . . . . 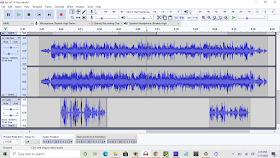