Radiant, not rain-sodden (yet)

They say it’s up that one man may be buttered,
And off that another man may be cheesed;
But no knowing if he is gratified,
Or instead, he is mildly displeased.
– Porridger’s Almanack (Breakfast of Ganglions)

One observation more I wish to add to the musings upon Counting Sheep (or, The Dreamy Abacus of Don Quijote), which is:  I feel that it is my most significant pre-Passion compositional landmark.

This morning saw the inaugural performance of Five Smooth Stones From the Wadi, with Marissa Bell (flute), Barbara Otto (organ), & yrs truly (clarinet).  Within its admittedly modest niche, the piece seems to me a reasonable success.  We all found it a gratifying piece to play, and it pleased the hearers.

Tomorrow (if there is no delay, and a delay is so common in such undertakings that we might almost rely upon it—almost) we may receive the Thank you! but sorry message for the Ear Buds.  So what do I do today?

Why, resume work on White Nights again, of course.  Night the Third is, in my now-long-established scheme, the only night which is a single scene;  but now I think I may change that.  In the novella, there is the simple line, She had arrived a whole hour before I did.  And now I think I want to begin Scene 11 with the Dreamer walking to their meeting, in an echo of his walking music from Night the First.  Perhaps we leave it as a single scene, with a sight of Nastenka already in place, as the Dreamer walks.  The scene itself is Nastenka nervously happy, expecting word from the Lodger, and the Dreamer, who has found that he has fallen for Nastenka, who hopes through the scene that she feels that, and will respond to it.  And at the close of the scene, the Dreamer nearly reveal his love.  (Music for nearly revealing love . . . I think I just about hear it.)

In my original outline, I had rather lazily noted the text (as an indicator for the musical character) dreary and rain-sodden.  The chapter begins indeed with the line:  Today has been dreary and rain-sodden, without a ray of hope, like my approaching old age.  The ambiguity being that this appears in fact to be the condition after their meeting on the third night.  Further down the page:


I had thought she would not even notice today’s rain, but still she has not come.

Yesterday was our third rendezvous, our third white night . . .

So I think the dreary and rain-sodden music must instead be Intermezzo III. 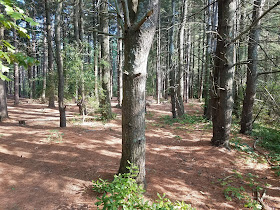