Stay of Execution, or, The Piece It Took Me 14 Years to Write

The ballet after White Nights lay dormant many years, Gentle Reader:  I started it in 2003, worked at it in fits, got about 90 minutes of the music written, and then I stalled.

I don’t mean that my composing stalled, for I have written much music else, most of it with more immediate prospects for performance than a big ol’ ballet in which the composer (nearly alone) took any interest.  Still, Scene 8 of the ballet has been my closest encounter with Writer’s Block.  I never actually gave voice to the rhetorical question, Rossini, que me veux-tu?, but at times, it was a near thing.

Getting the Symphony chopped out in good order, though, has helped me get over whatever the block was.  And now the Clarinet Sonata is done, I’m bearing down on White Nights until it is absolutely done, by year’s end.

The scene which I had not written over all the long years is an adaptation of Rossini. In the novella, a young man lodging with Nastenka and her Granny takes them to the opera to see the Barber of Seville. My plan from the beginning was for this scene, musically, to be an extended splice of the Overtures to the Barber, and La gazza ladra. Because the piece would invoke familiar source material, I wanted to be sure to do it just right (by my own lights, granted).

Completing this scene has been my own private Philosopher’s Stone.  In 2014, the summer of recreating the already-composed numbers of White Nights as Sibelius files, I returned to the scene, in brief earnest, composing a one-minute introduction which stands pat still.

As of today, Independence Day 2017, I have at long last finished composing Scene 8: At the Opera, and my heart exults that I have written it just as I have always wished I might write it.  No, even better, I swear.  It is A. recognizably Rossini;  B. recognizably Henning;  and C. belongs to the White Nights.

(There is one Scene from Night the Second which I arranged for an ad hoc instance of The k a rl h e nn i ng Ensemble, which we performed in Woburn perhaps eight years ago.)

I have been thinking of the thin edge of the wedge.  I used to think that the Overture might serve (and it may yet in future, perhaps).  But I have now fancied that the present scene, under the alternate title of Il barbiere ladro, may be more readily saleable. The novel approach to / use of music already familiar to the average concert-goer, and its suitability (I think) for either regular season or Pops festival use should be an argument in its favor.

But, for now, enough speculation about where the piece may or may not go:  today I rejoice that the piece is done, and that it is everything, musically, which I could have wished of it.  Everything, and more. 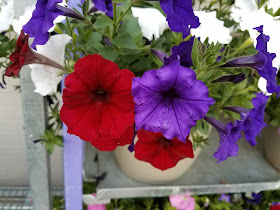