The thing about having started a large-scale project in 2003, and its necessarily changing in many details (and somewhat in scope) during its early gestation, and the project being of interest to not much of anyone other than the composer, so that there is no external demand for (to put it curtly) efficiency and speed of production, so that after getting a chunk of the work done, you leave the project on the shelf (if an electronic folder on your hard drive is a “shelf”), and returning to work after a loooooong interval . . . you take or leave the old scraps of ideas on a case-by-case basis.

Witness the breakdown of Night the Third in the I-forget-just-when-I-drew-it-up outline: 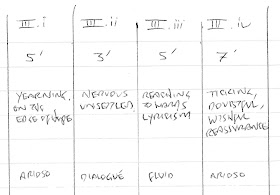 Probably out of a default inclination to give it ‘weight’ roughly equal to the second, we see Night the Third divided into four Scenes, running a combined duration of 20 minutes.  It is so long since my thinking ran this wise, that (again) it is only the testimony of the document which reminds me of the fact.  I abandoned this sketch for a number of reasons:

Reducing the Scene to a single through-composed number, playing out a series of contrasting moods and running less than seven minutes, is good for the dancers, good for the audience.

(And, incidentally, good for the composer.)
Karl Henning at 16:55