Sound & Sight in the works

The artists have been busy on their own account (which is, truth to tell, their normal condition), so it was only yesterday that they sat down to listen both to The Conquest of Emptiness (the fixed media, plus "virtual winds" so that they have an idea of what we will play in counterpoint) and to On Contemplating the Irrepressible.

When Masha and I first chatted up the project, we settled on two pieces of art-plus-music, the first to be of a somewhat lamenting character (well, we said "lamenting," and I guess my music went "somewhat," there), the second, lively and cheerful.

Back when I first played for the artists the fixed media for The Conquest of Emptiness, I also played (see "virtual winds," above) the first 24-48 measures of what I had written at that time of the obbligato winds. I was highly satisfied with the both the writing itself, and how it played with (or, played off against) "the fix." This is a joint effort, however - I am asking the artists to do something a little outside their typical experience, in having them do their work as a performance, to the strict timeline of a piece of music . . .

--In a sense, they are perfectly accustomed to performing in public, all the times they set up an easel in the Boston Public Garden, or Boston Harbor, or the Arboretum, or anywhere, where passersby take an interest and stop to watch them in action. So the novelty is in degree, not in kind--

. . . and their feedback is a vital part of getting to a result with which all the artists involved are satisfied. And my first go at the wind parts for The Conquest of Emptiness, Masha felt was too active, cheerful - which was not an artistic cavil at the musical writing, but an observation on the character of the piece, to which she and Irina will respond in the space. I set immediately to re-composing the winds, but it was only yesterday (as I say) that the artists sat down with me, that I might demonstrate "the new piece" for them. They pronounced it satisfactory. (I should add that, at first, when I played for them simply the fixed media mix, they found it beautiful; they did make a couple of requests, which I incorporated in the final mix.)

So: it was only this past Saturday afternoon that I reached the completion of the fixed media for On Contemplating the Irrepressible. It's a good job I had all my evenings free last week . . . I did not genuinely dawdle, but I was a while getting the skeletal "accompaniment score" composed; I don't think that was really done until Friday evening. Saturday morning and afternoon, then, were agreeably spent in manipulating sound objects and layering them onto the skeleton. One especially fun subproject was extracting passages from three instruments from the Ghanaian drumming section ('B'), smushing them around a bit, and superimposing the result as a quiet, subversive counterpoint against the second (B) section (m. 168ff.) There is so much vigor and activity in this piece (which was a designed contrast to The Conquest of Emptiness, of course) that on Friday and Saturday, I did have an idea of keeping the live winds' component simple. More on that presently. In all events, I find the fixed media bit for On Contemplating the Irrepressible highly satisfying, my best effort in that vein so far.

I spent yesterday morning working on wind parts for On C. the I., and by lunchtime I had got to the 2'30 mark (from rehearsing The Conquest of Emptiness with the band, we found it helpful to mark in the parts what timings of the track align with the rehearsal marks) so: one-third done, and for much of the rest of the piece I could with relative ease adapt the material already written.

This, then, was the point at which I sat down with Masha & Irina to demonstrate the tracks. The artists found the fixed media for On Contemplating the Irrepressible a blast, too. They like the fact that it is not seven and a half minutes of unrelentingly fast music, but that there are the contrasting Ghanaian drumming sections, which are more moderate in pace, though still active. They want the ending to be a little louder, which I think is an easy remix.

I then played for them the first 2'30 of the piece, together with the wind parts I had then written. She expressed herself with great delicacy and sensitivity, in advising that the wind parts from that morning were too busy; "I'm sorry to make you do more work," she added. I hastened to assure her that she was absolutely right; that I myself knew a day and a half before that I wanted to keep the wind parts light of tread, but that I had lost sight of that mission; and that, as for doing more work, I wanted to make sure I was doing the right work. Right away I spent about 20 minutes modifying what I had, to test on Masha's ears, and we had the solution; and I finished off the wind lines over the course of the afternoon.

Part of 'the lighter touch' angle is, we winds have long stretches of rests. But, we aren't really 'the concertante soloists' in this context, but part of the accompanying ensemble for the featured artists; so, we'll count our rests and make sure to come in on time.

The overall structure of On Contemplating the Irrepressible, then: I don't know if this is an official musical term, but it will do the job . . . the rhythmic soul of the (A) section is the classic "mariachi hemiola," the supple rhythmic alternation between 6/8 and 3/4; in the case of my score, I vary this a little further in 'every other 6/8 measure' by an additional beat. The basic (A) riff, then, is a four-measure pattern: 6/8 - 3/4 - 9/8 - 3/4.

There is an (A') passage which is progressively varied, the same tempo as (A) but in effect 'relaxing into' a regular 3/4. At first, anyway - for we soon alternate, not with 6/8, but with 2/4. I thought of this as a sort of codetta, and as a result it is a final variation of this section which drives into the final cadence.

As mentioned above, the (B) section is a 3/2 riff which I first learnt back in Charlottesville, courtesy of Scott Deveaux's African Drumming seminar in Charlottesville. Add a ritardando here and an accelerando there, and an assortment of these building blocks essentially accounts for the course of the piece. 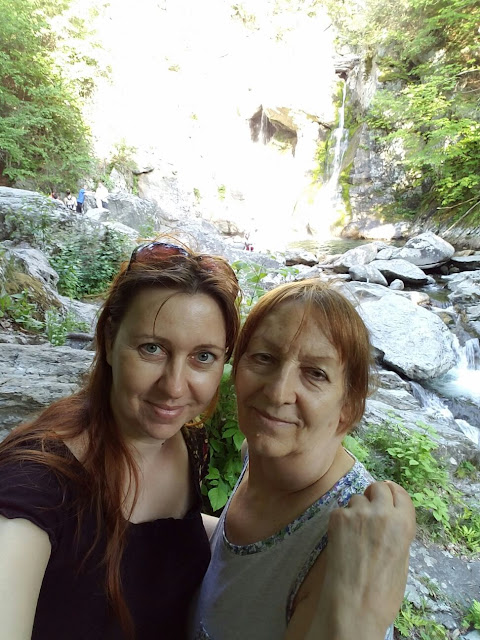