Plan B: The Op.112 Ramifications

henningmusick: Something old, something new

No one who has looked over the score of my Misapprehension for clarinet choir in 15 parts, Gentle Reader, will wonder at my wishing that we might hear an actual performance. At the time of the above-linked post, I was thinking of mandolin orchestra as an alternative scoring; but on cooler reflection, the search for a mandolin orchestra which could manage 15 wilfully independent parts would prove (if anything) yet more quixotic than the original scoring. This week, the thought of a more suitable Plan B, an alternative scoring which many would likely have thought more obvious, lit upon me. More on that afterwards.

The non-performance of the Op.112 made me wonder if I had not misapprehended the mission. So I reached out to my esteemed colleague, Dr Timothy Phillips yesterday.

Hi, Tim! I am guessing that my Misapprehension is not the good fit for your clarinet choir that I had hoped. It is my own fault, pretty much writing the piece which I wanted to write. If I were to make a second attempt, how should I do things  differently in a new piece?

Thanks for your patience and understanding.

Even before I heard back from Tim, ideas formed for a new piece (for the moment: piece x). I saw (or “heard”) directly the tone, texture, and overall arc of the piece.

With an amiable forthrightness entirely in keeping with his commendable character, Tim returned to me with a most admirable promptitude;  and he laid bare that that very September saw a sharp rise in the number of clarinet students, and thus an increase in his own studio time.  One way in which the schedule perforce gave is, the clarinet choir now might enjoy perhaps three rehearsals to prepare for a concert — and Misapprehension is certainly a piece which will want more than [its portion of] three rehearsals.

We then had an exchange on how a new and better-suited piece ought to sound, in whose course I had to confess to a probable lack of any talent for writing music which might set an Alabama dad’s foot a-tapping.  (And, incidentally, rendering piece x a non-starter for our purposes.  But not at all any loss, as shall be seen hereafter.)

That modest (and, so far as is yet known, entirely accurate) soul-shriving done, however . . . I then took thought for musical material which may in fact suit the demands and logistics of Tim’s fearless clarinet choir (for the moment: piece y).

Earlier in the week, on my after-work walk to the pond, when I reached one of my favorite spots — a deep cabinet of slender pines — my eyes were met by an unusual sight.  A young person was seated on a stump, oh, perhaps 150 feet into the brake.  It isn’t often I see anyone lingering in that spot (most of the people I see are folks walking about, like myself — which means that, hey, I seldom linger there myself . . . seldom, though not never), but I certainly had never seen anyone there, with a handheld device, and earphones.  I am not writing this to judge:  here was someone perhaps who needed to be alone for a while, and this was the way in which she needed to inhabit solitude.  On the face of things, it did look like a sorrowful icon of Our Disconnected Age, each individual in a cocoon of symbiosis with a smartphone.  As one who avails myself daily of the convenience and interconnection which a smartphone provides, I understand the grey area, and my hand shan’t take up that stone, thank you very much.

Why I mention this here is, that I reached those pines on my walk yesterday, when (by the way, availing myself of the smartphone which I almost always carry with me — it serves as my pedometer, as well) I had sent the above message to Tim, and my musical mind was turning to a new piece (piece x, you may recall).  My walk yesterday, and the spacious, many-columned beauty of the place gave me the musical ideas;  and the unhurtful pang of recalling the sight of that lone youngster yielded a kind of title (you knew, Gentle Reader, that I should not leave it at “piece x”).  It started out (arguably, a little petulantly) as:

The dream of a young man in the woods, listening to something through ear buds

— All right, I should interrupt this momentarily, to acknowledge that, really, I need to press on with writing From the Pit of a Cave in the Cloud, and anyone who knows Professor Admee knows how implacably impatient she must be with me, that I am not simply about it.  Why must I be surrounded by idiots? I can hear her soliloquishing.

Well, too many ideas is a great problem for a composer to have, I think;  so I welcome the ideas for both pieces, x & y . . . and I wanted to sketch the ideas down, for future completion.  So this is the apologia for yesterday evening’s activity.  (I vow to devote the weekend to the Professor, and to the Professor alone.  Musically.)

— So:  The dream of a young man in the woods, listening to something through ear buds.  I did not necessarily mind the ponderous length of the title.  (Indeed, that was part of the point at that stage.)  I suppose my dissatisfaction was a matter of feeling a certain insufficiency of poetry;  and thus it was, too, that I was struck by the botanical-pastoral (God save me for sounding like Polonius) resonance of ear buds.  So the second version of the title is what appears on last night's version of the score:

Ear Buds (The dream of a young man in the woods, listening to something)

Much an improvement, I think.  But now, the weakness of the superfluous-at-best (carping at less-than-best) to something is made painfully apparent.  If we simply lose that—

Ear Buds (The dream of a young man in the woods, listening)

— the result commends itself.

It has already been told how I first conceived of this piece as the new clarinet choir piece;  but whatever its virtues, it is no toe-tapper.  Yet the idea is technical ease;  so I have decided to make it a piece for high school band.  It will work even better with more and varied voices, and I can figure out how to give the percussionists things to do.   I composed the first 16 mm. of Ear Buds last night.

The homey rhythmic requisites for the new clarinet choir piece suggested the dance form Stomp.  At first I thought Cancelled-Stamp Stomp, and although I rather like it, the Op.131 contains a recent reference to postal cancellations, and without a musical connection (which seemed inapt), the duplication were perhaps lazy and inartistic.  Still, I wanted a local stamp, so I’ve settled on Saltmarsh Stomp.  Again, only as a bookmark, I composed the first six measures last night.

That much settled and accomplished, I am now Admee’s solely . . . . 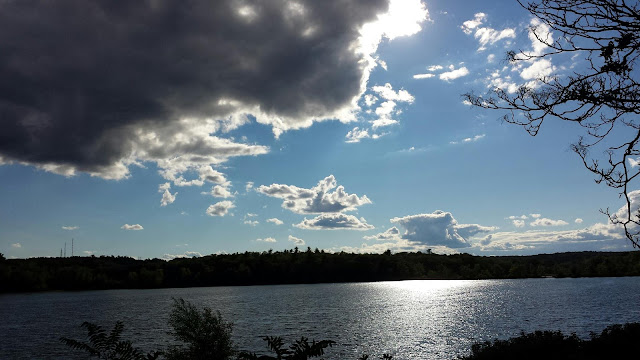