The beginning of the end (so to say)

Time and reflection have smiled upon the initial idea for the Gloria (chicken-scratch on-the-train sketch shown below). As I had conceived (but not troubled to commit to paper), I've teased this idea out into a full opening sentence, with which I am entirely pleased. The movement thus begins in a manner completely distinct from the other movements of the Mass, which was one high priority. (The two movements which most nearly begin alike -- the Kyrie and the Agnus Dei -- I am well content that it should be so. The Sanctus begins with a distant echo of the antique Alleluia in A-flat. And the Credo begins in something of a similar manner to my St John Passion, which is probably only to say, somewhat chant-like.) Very excited about this start; looking forward to the weekend when I hope to make good gains on the piece. And you never know: perhaps a première of the complete Mass by the as-yet-unnamed Boston collective project is a sound possibility, after all. 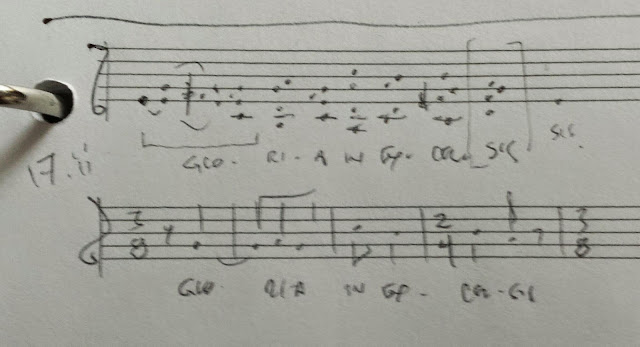