Back when the idea first arose, of providing new music for an ensemble of cello students, somehow I wanted right away to make a suitable arrangement of Lutosławski’s Lullaby. Then, I went back and forth between thinking such an arrangement possible, and finding it hopeless. (Of course, the hopeless end of the pendulum swing was simply insufficiently imaginative.)

All the same, I wanted to compose new music for the project, as well. From the outset, then, it would be necessary to ‘unify’ new work, and an idiomatic re-working of a toccata written 15 years earlier. The title Après-lullaby is both a ‘personal’ allusion to this ‘historic perspective’ built into the piece, and poetical suggestion.

One fanciful notion which arose, was to try to write a piece based on a single chord. I knew I should give up the idea; sometimes it is more artistic to make temporary use of an idea, than to insist on its consistent application. It’s a fun idea — if you only use one chord, how do you create any sense of musical motion? (Then again, there are the famous Beethoven codas, which repeat only the tonic chord, whose motion seems incapable of finding its rest.)

Or it may be that I soon altered the ‘rule’ to two chords. The opening of the piece largely bears this out, though at some later stage of ‘shaping’ the passage (both for itself, and for the passage’s relation to later events) there is already an intrusive F#: 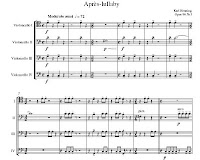 Perhaps the passage really was in some part a sort of inversion of Beethoven . . . a circular obsession with tonic and dominant chords, serving as a (relatively) slow introduction. For months, the shift to a faster tempo had been a sudden matter; the scalar accelerando in Cello I leading to the Poco più mosso was an idea which came to me only this past week, I think: 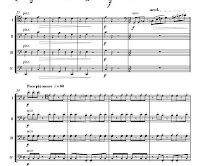 To the extent that the faster section is also a harmonic obsession with tonic and dominant chords, it is an extension of the introduction. The repeated-note rhythmic pattern is ‘against’ the meter, and is asymmetric of itself. As I work this idea, at first the four parts are all in the same rhythm; then, the upper two parts begin to separate into suggestions of more sustained material.

The goal, though, is the passage where at last (a) the four parts are rhythmically independent (though in imitation), and (b) the imitation yields an enriched harmonic profile which, obviously, contrasts with the mostly two-chord game of the piece thus far: 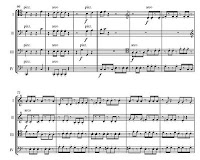 In the history of my writing the piece, though, the fact is that I had first composed the contrapuntal ending of the piece (and therefore of the set of three pieces): 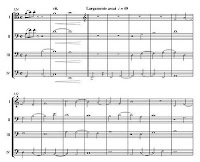 . . . a passage which itself was a musical allusion to the counterpoint of the second piece, Marginalia.

As I was ‘tooling’ the rhythm games of the Poco più mosso section, I had the happy thought of taking the counterpoint of the ending, transposing it up a fifth, and applying to it the prevailing rhythmic profile.