And Now to Bed (End of Lullaby)

Amazing what you can get done, given a couple of free evenings. I was only hoping to continue work tonight on the cello ensemble adaptation of Lutosławski’s Lullaby, but momentum took over, and I sailed through to the end. 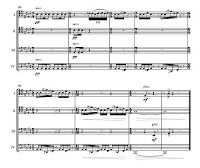 It’s a project I’ve reflected on a dozen times—and for which I had even started some fresh sketches on paper, only I soon reached the conclusion that work would be simpler and more efficient if I worked directly in Sibelius.

The Lullaby is an arrangement of a piano toccata. One decision I reached at an early stage (so early, indeed, that the rationale got lost, but I continued to trust the decision) was to transpose it down a minor third to c# minor. There is a short passage in which I wondered if the enharmonics compelled by the transposition were worth the trouble . . . but I reasoned (or rationalized) that string players like sharps. And in all events, when I got to the last two measures, the closing passage lies perfectly in the new key for cellos, and vindication (both for the transposition, and for the arrangement as a whole) was complete.

Originally, I settled upon the idea of this arrangement, when I was imagining scoring it in eight parts. When Audrey & I talked further, and we decided on four parts, I then misdoubted whether the piece would work in fewer parts. This was, in fact, a non-problem.

A correct numeration was a slow decision. Normally, the original toccata being my Opus 25, I should have designated this arrangement Opus 25a. However, I decided at some point (probably around the time when I was in doubt that the arrangement would work in four parts) to compose a new piece, or new pieces—and in April I did indeed write the Marginalia, which is probably about when I gave it the Opus 96 spot . . . but it seems confusing and fussy to insist on tying the first of three pieces to the opus number of the source-work, and to have the second and third pieces a different (and much later) number. All in all, it was only this week that I decided to include this arrangement of the Lullaby in the Opus 96 as № 1, the Marginalia will be № 2, and Après-lullaby, № 3.