A Briton comes to Boston, to conduct music by a Frenchman, written the year after he visited Russia [ review ]

(Even better than when de Burgos led the Grande Messe des morts, I might add.)
Really enjoying the Sibelius software. There are some aspects of Radiant Maples which will make it tricky playing; but cues in the parts will help . . . and those are very easy in Sibelius.

I find the most curious things in old folders on the PC . . . including this outrage of an autobiography:

When I was graduated from high school, my parents informed me that my academic underperformance had so disgraced them, that they were obliged to sell me to the Juilliard school as an indentured servant.

Unconfirmed reports indicate that their compensation consisted of original-cast recordings of Fiddler on the Roof and Mame. And the right to groom Michael Jackson’s pet monkey.

I worked in the kitchens of Juilliard for three months, until my skillful shelling of peanuts, and highly fashionable ill-humor, earned me the admiration of the dean of the Flageolet Department. My success was short-lived, however. I was expelled when it was discovered that I was secretly reading the “Heard on the Street” column from the Wall Street Journal when I ought to have been analyzing the scherzi from the Schubert string quartets.

I was exiled to Louisiana, where I was forced to spend two years listening to the song of Spanish moss. My hair color changed to jet black, I was made to dress in synthetic fabrics, I was forbidden the use of umbrellas, coffee was provided to me only in chewable form, and at last, I had succeeded in distilling the sound of Spanish moss into a twenty-minute tone poem for nose-flutes and giant rubber band which captured the imagination of Rolling Stone. Jan Wenner wrote, “You can hear the moss and feel the okra.”

I was then taken on as a sonic lichen advisor in the Carter administration. The political analysts say that the hostages in Iran were Carter’s downfall. This was an elaborate deception to spare the country embarrassment over the true reason for the collapse of government: my $2.3-billion failure to make good on a promise to carpet Isfahan with singing Spanish moss.

My subscription to Better Homes and Lichens was cancelled without pro-rated reimbursement.

I was drinking Great Bluedini with George Lucas in The Space Bar in Bakersfield, where I invented the word wookie, which Lucas swiped and paid me hush money. Lucas always secretly despised John Williams, and hired me to sabotage all the f-sharps in the “Cakewalk of the Adolescent Ewoks” while the parts were on the stands at the Hatch Shell on the Charles River Esplanade.

The footprints on R2D2 in the unretouched release of The Deodorant of the Jedi were my doing. I do not have shoes that match them, but I produced the prints with stencils and a mixture of whole-milk organic yoghurt and squid ink.

The market demand for whole-milk yoghurt was the inspiration for the evolution of several otherwise promising violists from the Academy of Saint-Martin-in-the-Fields into strikingly photogenic cows. My job was tuning the cowbells so that their vibration would render the milk resistant to bacteria without irradiation.

I returned in triumph to the Juilliard school, moss and yoghurt in hand. Through a combination of the fact that the music library was now entirely on-line, together with a disaffected Canadian’s web expertise, my proficiency in squid-ink calligraphy and some just plain lucky breaks, I was able to convince the academic musical community that the nine symphonies which were traditionally considered the work of Beethoven were in fact written by me over a series of summer vacations on Aruba, and had not really existed before 1986.

The great advantage is all the royalties on the hundreds of recordings made of ‘my’ symphonies by the world’s major orchestras every year. The down-side is, I have to make sour faces and pretend I’m deaf.

There is absolutely no truth to the rumor that my middle name was changed to Prescott from Prosciutto. 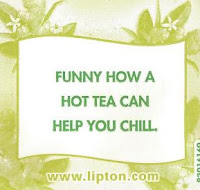 (Standard disclaimers apply: I don’t work for the Lipton Co.,
nor does any of my family or friends, to my knowledge.
I just drink a lot of tea.
Most of it distributed by cos. other than Lipton, actually.)
Karl Henning at 18:20