That a composer, struggling for any kind of recognition, writes in the 21st century to review a performance of Berlioz . . . of a piece which, though it was performed in Boston as early as 1888, the Boston Symphony did not ever play until 1954 . . . and Berlioz himself struggled for recognition in his own day, and had to resort to writing reviews to earn his bread . . . .

I suppose it may be possible by an effort of the will to keep the flesh from creeping.

I drew up a “to do” list on Saturday; made a good start on it, too. One task got a bit involved. 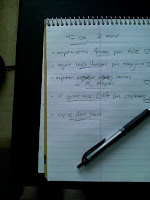 Back when I met with Mary Jane Rupert to read Lost Waters, I also brought the harp part for Radiant Maples. One of the take-aways from that meeting: although repeated notes are idiomatic to and manageable on piano and guitar, they are less so with the harp. There are not many passages of repeated notes in the harp part of Radiant Maples (which is one reason, I suppose, that the subject did not come up when the piece was read by Brave New Works in November of ’07), and those passages would be easy to emend . . . and I wanted to bring the score into the Sibelius environment.

So, I opened the Finale file, exported it as an XML file (an older version of XML than Sibelius 5 would prefer, but there it is). Just a few measures or so in Maples came out wonky in Sibelius. One was a measure of 2/4 in the flute in which the first beat was nested triplets . . . i.e., triplet eighth-notes, of which the first two eighth-notes are subdivided into triplet sixteenth-notes. The second beat is divided also into an eighth-note triplet, of which the first eighth is subdivided into triplet sixteenth-notes, the second is subdivided into 32-notes, and the last is just an eighth-note tied into the downbeat of the next measure. The state of the XML file import was such that it was impossible to ‘fix’ that measure in the flute; but I found an easy work-around: I built the measure correctly on the clarinet staff, pasted it into the flute part (over-writing the ‘unworkable’ measure), and then deleted the clarinet measure (where there needs to be a measure’s rest, anyway).

The other measures were in the harp; it may be considered unnecessary layout fastidiousness, but there are many 10:8 decuplets in the harp and piano, and in two measures as imported into Sibelius, the “10:8” marking over the beam was askew, i.e. not parallel to the beams. Just looked bad; and, well, the point of Sibelius (or Finale) is that the music should look good. Work-around was similar to the flute measure, only easier, since I could copy a ‘clean’ decuplet, paste it over the ‘bad’ one, and transpose it to the correct pitch.


An e-mail query comes in regarding O Gracious Light (Opus 50, choir accompanied by strings and harp). Could be the first performance of the work in that original scoring (I adapted the accompaniment in two different ways, for the Jefferson Ave Presbyterian Church in Detroit, and the Cathedral Church of St Paul in Boston, respectively).
Karl Henning at 05:54