2 partridges
2 Mallard ducks
a Dungeness crab
24 hours out
of the Pacific
and 2 live-frozen
trout
from Denmark
— William Carlos Williams,
from “Two Pendants: for the Ears”

A recent intensive revisitation of the six Bartók string quartets has me thinking again about form. I ought really to settle into some detailed comment on the quartets (and at some point shall). I bought this bound edition of the complete quartets at Patelson's on 56th Street, oh, years since; must have been on one of the holiday breaks from Wooster. At about the same time (maybe the same occasion) I bought scores for Stravinsky's Symphony in Three Movements, the Hindemith Konzertmusik Opus 50 for strings and brass, the Shostakovich Tenth & Fourteenth Symphonies, the Messiaen Quatuor . . . I must have looked at least partly through the Bartók scores at the time, but a proper page-to-page complete reading was on the to-do list for . . . decades.

For the moment, two immediate details which it tickled me to see. One is a rhythmic device I've used myself, and maybe once on a time I saw it first here in the score (or, in some score); but I've thought that I came up with it independently (and maybe I did), and it is a pleasure to run across it in a Bartók quartet. [Anyway, what is it?] An “off-beat” quintuplet . . . say the meter is 2/2, the half-note is a beat, and your two beats subdivide into four eighths; and instead of taking one of those half-notes and altering its four eighth-notes to a quintuple eighth-notes, you take that eighth-note quintuplet and begin it, not on the accented beat, but on an upbeat: in the following example (from Intermezzo II from White Nights) examples are the violas in the first measure, and the cellos in the third. 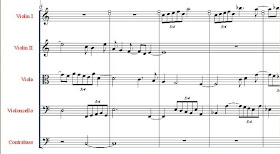 The second detail to mention here is a four-note motif which I don't recall actually reading in a Bartók score, but I probably picked it up by ear, for it is an element I used in that movement of the Three Things That Begin with ‘C’ in which I was taking Bartók for a model: two perfect fourths, a minor second apart (e.g.: D,G,G#,C#).

As the medium of music is the most abstract of the arts, musical form is more flexible than is sometimes credited. This must be the case, if we consider how little regard we should have for a composer (a fictitious exaggeration, of course) with so little creativity as to use and reuse only the same tried-&-true models. There are great composers who worked ingeniously within established forms; there are great composers whose talent was expressed partly in stretching, expanding, transcending established forms. But a composer who, when he wrote in ternary form (say), always used the same proportions, the same phrase-lengths, always the same harmonic motion . . . .

[As on so many levels, there is a balance (or tension) between one’s habit, one’s characteristic methods or manners, and what can be a descent into ‘routine’.]

Sonata-allegro design, now . . . which I wonder may be one variation on the theme of Beethoven, the Mold-Smasher, taken for The New Mold. Beethoven took new liberties with the scale of the sonata-allegro design, with its ‘moving parts’, he would introduce new material in the development, &c. &c. He pushed, pulled, bent & shook down the design, and showed it could still work. How do we know it stills works? Is there an answer to that question which is not at heart an echo of PG Wodehouse’s Jeeves? — I believe Beethoven has given general satisfaction, sir. We hear the first movement of the Seventh Symphony, and we feel its coherence, and approve its excellence of form. (Not all of Beethoven's contemporaries were willing to offer such approval, we might note.)

Right after Beethoven, some composers were inspired by his example to continue experimenting with the symphony as a composite form (Berlioz, Mendelssohn, e.g.) Brahms was himself, and after a First which was praised as ‘Beethoven's Tenth’, afterwards wrote a Third and Fourth which are, if anything, surprisingly ‘tidy’ in contrast to Beethoven's progression. Nought wrong with that, as is partly my point: approach each artist on his own terms.

Not the least shade of a formal ‘problem’ do I have with, say, the last three Tchaikovsky symphonies (though some respected colleagues harbor some reservations); they give ample satisfaction, and I tend to wonder if any formal problem had with them is a kind of WWBD (What Would Beethoven Do?)

At risk of seeming to invoke Debussy's dictum (Pleasure is the law), as a composer I wonder where the line can be crossed, so that one can say, There! That is a violation of the sonata-allegro design! For there are many pieces, written in a style not especially close to my own work, which I think perfectly fine applications of the design. The first movements of the Rakhmaninov First and Second Symphonies, for instance.

Indeed, I proclaim my entire contentment with the monstrous interruption that Shostakovich makes upon the sonata-allegro design of the first movement of the Leningrad Symphony, with the march tune that starts out simple & jaunty, and eventually becomes a devouring flame.

One sonata-related statement puzzled me mightily when I first read it; it puzzles me still, but I don't mind if I never sort the puzzle out. In a course on Stravinsky while I was pursuing my Master’s at UVa, one text we used was Roman Vlad’s survey of his life and music (in general, a most interesting book to read). On p. 148 of the third edition, Vlad writes:

With regard to the shape of the first movement of the Symphony in Three Movements, it should be pointed out that it follows quite strictly the pattern of the classical sonata movement as found in the first Allegro of the Beethoven Fifth Symphony.

Would this statement be perhaps improved, if we substitute the adjective loosely for quite strictly? Setting aside the question of key and harmonic centers, there’s a wealth of material in (what we are invited to consider) the Exposition which we don't hear again in that form (which would be the case if the pattern followed Beethoven strictly). Rehearsal № 34 is a reasonable candidate for the start of a Development, and it has resonant ties with what came before, but at № 38 Stravinsky switches gears to what feels more like a contrasting section, than like a Development proper. What we must probably consider the Recapitulation, is the jazzy strings-&-piano section which returns (a whole-step higher than in the Exposition) at № 88; but again, that means that there’s 30 busy measures from the start of the movement that haven't come back. We will at last hear the opening flourish again, but only after echoing back to № 38 (a recap of the Development rather than of the Exposition?)

I should step back to say: it's a great piece, and I like it as it is, and it works just fine. Unless I'm really misunderstanding Beethoven, I don't find the form of the first movement of the Symphony in Three Movements in strict ‘compliance’ — and that's fine. Maybe this is near enough for Vlad to make the parallel. There is certainly an opening section of a series of musical ideas presented for the first time; there's a middle section which treats some reflection of that material in a new way; and then there is a varied return to material in a way that we've heard before.

Musically, it works; it bears some resemblance to the process of sonata-allegro design. Does there need to be a comparison to Beethoven for ‘authentication’? Wherein does the usefulness of considering form in music reside?

This has been more ramble and reflection than anything which I might expect to be of use to anyone else. If an apology is in order, I offer it.

Anything is good material for poetry. Anything.
— William Carlos Williams,
from Paterson, Book V