Words of Passion, Before

2008 started out on the best compositional footing I could have wished, as I spent a week in a warmer clime essentially sequestered to complete composition of an unaccompanied setting of The Passion According to St John.

For several years, the Good Friday tradition at St Paul’s (the Episcopal Cathedral in Boston) included the choir’s singing of an edition (prepared by prior music director, Mark Engelhardt) of a plainchant setting of the St John Passion. It’s nice enough, and was an appropriately solemn musical reflection for that annual occasion. Apart from the crowd bits (parallel organum with full choir), we always sang it with individual voices for the personages, and of course far the greatest burden rested on the Narrator, an alto formerly with the Cathedral choir who was unusually comfortable in the top of her range. In truth, the whole “lie” of the setting was high-ish (the role of Pilate especially could, without due care, come off as rather a squealy tenor) . . . but, as I say, musically satisfactory.

The performance of this Passion setting the first year of the new music director’s tenure was unsettling in its degree of musical and liturgical dissatisfaction — though nothing went wrong with it which could not have been avoided by (a) proper rehearsal and (b) assigning the roles to voices suited both to the tessitura, and to the style. The musical result of this provoked an irrational and irreversible dislike to this lovely traditional Passion setting.

Anyway, as quondam Interim Choir Director, I did not see any good outcome to a hypothetical attempt to restore that traditional plainchant Passion to the graces of those who seemed now fixed against it. So, as then Composer-in-Residence, I essentially seized the opportunity, and put forward the suggestion that I compose a new setting, tailored to our choir.

Originally, I had the idea of spare use of some instruments, though mostly for interludes, hardly at all for accompaniment, strictly speaking. And in fact, I began by composing an instrumental introduction. Even so, my early thoughts were to basically compose the choral setting, and fit in interludes after; before long, though, I decided on a purely unaccompanied piece.

Another early decision (especially considering how ill-suited the solo voices which had been employed in the ‘old Passion’ proved for this musical environment) was that there would be no solo voices; the whole choir would (for the most part) sing through the whole thing.

At the start, I knew that for the Crucifixion I wanted to write something in the harmonically rich, rhythmically supple vein of my anthem Nuhro; that much of the text before would be delivered in a plainchant Psalm-tone (something not all that technically removed from the ‘old Passion’ we had used); and that I wanted polyphonic-ish passages to break things up from time to time (‘wrong-note Monteverdi’, if you like).

With that much pre-compositional notion settled, I started by writing an original plainchant Psalm-tone one morning while riding the bus into Boston. And for probably almost a month, I would chip away at the task of setting the text on the morning commute (including the imitative material for the sections, “I told you that I am he …” and “Now Simon Peter was standing …”). When I had gotten a good start on the piece (perhaps a quarter of the text taken care of), I set the piece down to see to other pieces (the Nativity mini-cantata Castelo dos anjos for Tapestry, and the completion of the clarinet/viola duet, The Mousetrap). This was perhaps late May of 2007.

Time and events interposed, and it wound up being some while before I could take up composition again. My weekly schedule got rather too hectic for me to find musical purchase in order to resume the task; and a friend (and the unfailing patience and support of my family) made it possible for me to spend a week down in Florida, when I should be at complete liberty to compose, and do nothing else (nothing else obligatory, at any rate).

Honestly, then, I don’t really have a clear, conscious bead on how I got from that one-quarter ‘torso’ of the piece, and the final result. I flew to Florida, had dinner with my friends, went to bed, woke up the next morning, and got back to musical work. There was a lot of work yet to do, and I was not conscious of any ‘this is what I’ll do at this point in the text . . . and this is what I’ll do at this other point . . . .’ Enough time had passed that I simply had to get the piece finished; I had ‘lived with’ the text and project long enough that I just felt that I could write it, if I had time to dedicate to the work. And I wrote; I just kept writing until I got to the end of the text. One of my own favorite passages, the Descent from the Cross, I started writing one morning; but the musical idea for that bit of the text only came to me the evening before.

One amusing post-script to that is: once I got to the end of the text as my friend at the Cathedral had sent it to me, I realized that the end was missing a few verses. I had written the double-bar (p. 45 of the score), and I was elated at having finished at last! And I went for a swim. But through that blur of delight in the accomplishment, there gradually came the (obvious, it ought to have been, really, as I’ve sung it God knows how many times) realization that we’re supposed to sing a bit more. I didn’t do anything about it right away, since my stay in Florida was about drawn to an end, anyway. It was a Sunday night when I returned to Boston; Monday morning I got up, went in to the office, searched the on-line Lectionary, and found my “missing” text. On the train-ride home that night, I composed the melody to set the text, and over that evening and the next, composed the accompaniment ‘underneath’ the text. 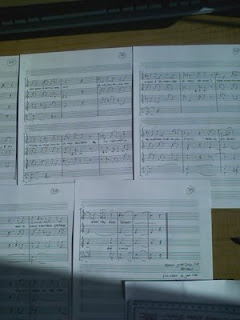 One thing I should add, especially since I’ve stated that I composed this setting not for solo voice(s): in this first performance, we do hear solo voices for most of the rhythmically demanding soprano and alto lines. It is not, repeat, not what I wanted; but the ladies of the choir had not been properly rehearsed in this music, and inevitably we reached a point when time was running short. So the “solution” proposed to me (with no realistic alternative) was to let soloists sing.